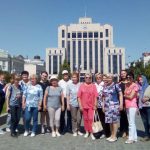 The city of Kazan gave the country a lot of prominent revolutionaries, proletarian poets and writers. In Soviet times Kazan guides proudly showed the tourists lecture rooms, where Lenin and his friends had an important meeting. After that meeting cocky Vladimir Ulyanov answered the police officer’s phrase: “What are you doing? Can’t you see the wall before you?” the following words: “The wall is rotten! Touch it and it will fall to pieces”. The statue of Vladimir Ulyanov is now seen near the walls of Kazan State University (in Soviet times the University was named after Lenin).

In Emperor times a lot of inspections arrived at the University to see the mood among students. All the inspectors concluded that it was necessary to close the place because young people disobeyed the laws of the Government and often spoke against the Emperor. At that time Leo Tolstoy and later Vladimir Ulyanov’s brother Dmitry studied here.

The central street of the city is named after another prominent revolutionary Nikolai Bauman. He was born in Kazan at the beginning of the 20th century. Bauman Street is not only the centre of the city, it is one of the oldest streets. In the times of the Kazan Khanate it had the name “Nogayskaya road”. This place used to be the main trading street of the city. The goods were delivered along the Bolaq River, on the banks of which a lot of piers, shopping malls and barns were situated. Here there were always many stores, rent houses, cafes, restaurants. Now in Bauman Street you can buy a lot of different Kazan souvenirs.

Other famous revolutionary Sergei Kirov was born in another place, but he studied in Kazan State University of Technology. Nowadays near the university building you can see his statue- in his left hand Kirov squeezes his cap, his right hand is raised for greeting.

Vladimir Lenin’s wife and prominent revolutionary Nadezhda Krupskaya visited Kazan several times and she liked the city very much. She contributed a lot to the history of the city when she didn’t let destroy Zinaida Ushkova’s big house and offered it as a building for the National Library of Tatar ASSR. One more revolutionary Vera Finger was born in the Tetyushsky district of Kazan and also lived in the city for a few years.

The historical centre of Kazan is situated in the Vakhitovsky district. This district was named after the tatar revolutionary, the leader of the Muslim Revolutionary Committee Mullanur Vakhitov. He was shot near the Kremlin walls by the White Army in 1918. Now on the hill in the city centre you can see a statue of Vakhitov.

The names of many genuine people are closely connected with Kazan: famous proletarian writer Maxim Gorky, soviet talented poet Vladimir Mayakovsky, author of the March of the Red Army and famous tatar musician Salih Saidashev, Hero of the Soviet Union Musa Dzhalil. Musa Dzhalil was captured by fascists, but his spirit was never broken.

During our excursion we will visit the places of strikes, meetings, secret gatherings and other places connected with soviet times. We will walk along the old part of the city and you will hear thrilling stories about the revolutionary and Soviet times of Kazan.