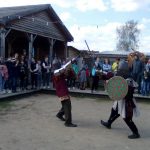 Sviyazhsk is a fortress city situated on a picturesque island. It was built under the order of Ivan the Terrible in 1551 as a military base of the Russian army during the siege of Kazan. Now it is a unique monument to the Russian Orthodox culture in the centre of the Turkic-Muslim world.

The place for building the new fortress was not chosen by chance. It is situated at the picturesque confluence of the Sviyaga River with the Volga, on high hill Kruglaya. The wooden fortress was first built in Uglich, then put it into parts and transported down the Volga River to the place of the construction. On the Kruglaya hill all the trees were cut down and the hill itself was lowered to the ground to prepare the place for the construction. The fortress was ready within 4 weeks.

It is well known that local Chuvash people took part in building the fortress as they hoped to become the citizens of the Russian State. The foundation date of Sviyazhsk is considered May 24, 1551. On that day Russian army stood on the shore of the Sviyaga River, consecrated the surroundings and started to build the fortress.

The defense territory of the fortress was much bigger than those of the Nizhny Novgorod, Pskov and Moscow Kremlins. In 1552 the last successful assault of Kazan was carried out and the Kazan Khanate was destroyed. Kazan lost its independence and became a part of the Russian State.

But this was not the end of the Sviyazhsk fortress. It became a city. Architects Postnik Yakovlev and Ivan Shiryai created unique constructions here. For a long time Sviyazhsk, but not Kazan was the centre of the whole region. But it was much smaller than Kazan and very inconvenient for being used as an administrative centre. From the 18th century the city of Sviyazhsk declined and turned to one of many usual small provincial towns.

After Kazan was conquered, the Assumption Monastery and the Monastery of the Holy Trinity were built in Sviyazhsk. The latter was closed in the 18th century and its building was used as a female Monastery dated back to the 16th century. Now on its territory you will see the Church of the Holy Trinity built in 1551. This is the only left part from the legendary wooden fortress of the time of Kazan siege. The Assumption Monastery has been working since 1920s. The buildings of both the monasteries are reconstructed. The tourists admire the unique Assumption Cathedral built in 1560 by Pskov architects Postnik Yakovlev and Ivan Shiryai (the masters, who worked under the construction of St. Basil Cathedral in Moscow). Here you will see unique frescoes of the 16th century: 1080 square meters of frescoes with more than 400 plots from the Bible. Here also there is a unique image of St. Christopher with a horse’s head instead of head is found.

By 1926 the population of Sviyazhsk became so few, that the city became a settlement. But before that during the Civil War, the body of the Soviets under Lev Trotsky’s command was located in Sviyazhsk for a while, which later greatly affected the history of the city. According to the legend at that terrible time the statue of Judas Iscariot appeared in the city square.

In 1955 the Kuibyshev Hydroelectric Power Station in Togliatti was built, and the middle stream of the Volga River became a great water storage. Hundreds of villages and many cities went under the water. But not Sviyazhsk, as it was initially built on the hill. Now the fortress –city with white-stoned walls turned into a unique “Island-city”, one of the main attractions of the Volga region.

Sviyazhsk has always been famous for its masters. Now on the island ancient crafts such as pottery and blacksmith arts are developed again. The ethnographic complex Horse Stable Yard of Sviyazhsk was reconstructed. First it was built in the 16th century with wood, then in the 18th century it was rebuilt with stone. Nowadays the museum complex includes handicraft workshops, a souvenir shop, functioning horse stables, a restaurant and a guest house. On the territory of Sviyazhsk the national park- museum is created and it is nominated for UNESCO Heritage Site that makes the city very perspective in the future.