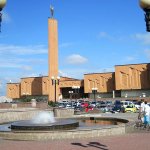 The museum of the 1000th anniversary of Kazan demonstrates the historical and cultural heritage of the Tatar people from ancient times to our days. The museum shows the history of Kazan during 1000 years by means of different artistic and documentary material and original exhibits. The museum of the 1000th anniversary is located in the building of the Culture Center “Kazan” since 2005. There are 3 halls in the museum with the total area of about 3000 square Here you see a unique exposition about the great city and its history A huge collection of the material heritage of ancient Kazan, from the old times to the 15th century is represented here.

Hall 1: ancient Kazan: from the years of 1000 BC to the 15th century. Here you learn about the history and culture of Kazan of that period.

Hall 2: Kazan from the 15th century to the beginning of the 20th century. The exposition shows the trade and economic links and spiritual culture of the city as a part of Russia, as the capital of the region of Kazan.

Now the funds of the museum possess about 49 412 items of exhibits. You can see the following expositions in the museum: Volga Bulgaria, Golden Horde, Kazan Khanate, Great turning point, Siege of Kazan, Kazan region, Kazan of the 19th century, Kazan of the 20th century, Kazan of today and tomorrow. The exposition also contains the lost monuments, including the legendary Kazan Gate (the symbol of independence). The new key of the city (instead of the lost one) to these Gates was made by analogy with the Bulgarian keys. Here you can find the exhibits connected with the spiritual culture of Kazan, the materials about the visits of royal figures to the city: Peter I, Nicolai I and Catherine the Great visited Kazan in different periods. The last part of the exposition materials is devoted to the history of the city in the USSR period and modern Kazan. Besides, here you can also learn a lot of information about the present international connections of the city of Kazan.