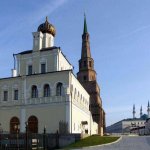 The Museum of the History of Tatar Statehood and the Republic of Tatarstan is situated in the centre of the Kazan Kremlin, the place that unites the memorial territory of the khan’s court with the power functions preserved to our days, the necropolis of Kazan governors and the symbol of Kazan – the Suyumbike tower.

If you want to learn more about the origin of the Tatar people and the history of the region you should visit the Museum of the History of the Statehood of the Tatars and the Republic of Tatarstan ba all means. The place for the museum was not chosen by chance. It is situated in the place that unites the most ancient part of Kazan, the memorial territory of the khan’s court with the preserved necropolis, where the Kazan khans were buried, the archeological monuments of the Khan mosque and the Syuyumbike Tower with its legends. The whole complex of the museum includes such architectural monuments as the Kazan Kremlin, the Presidential Palace and the Palace Church. Here you can also see the reconstructed place of State council (Divan-khane) of the Kazan khans, original labels, letters, decrees of the Kazan governors, state regalia: tamgas (family seals), emblems and flags. The newest history is represented by documents and photographs. An important part of the exposition is devoted to the gifts to the first President of the Republic of Tatarstan.

Different interactive media technologies are widely used in the museum to create the whole picture of the epoch. To feel yourself in the times of nomadic empires, on a large screen you see the scenes from the nomadic life, views of the endless steppe and traditional attributes of the nomads. With the help of the projection installation you learn about the main cultural and historical achievement of nomads -the creation of their own written language. The interactive model of the Kul-tegina Stella shows you the most famous monument of the Turkic script that preserved the message of the ancient governor of the Turkic state. Video projection helps you to see the processes of the building the Mongolian Empire and the formation and then collapse of the Golden Horde.

In the small cinema of the museum, located in the hall of the 20th century period you can watch a film mounted from unique archive video fragments. Documentary shots show both the process of formation of the Tatar Soviet Socialist Republic and report about the democratic reforms that led to the modern Republic of Tatarstan.

The visitors of the Museum can not only learn the historical past of the Republic, but also see modern Tatarstan – political achievements, industrial and economic development, sports and cultural progress.