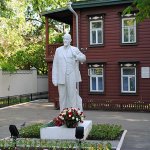 The house-museum of the Soviet leader Vladimir Lenin is one of the oldest museums in Kazan. It was opened on November 7, 1937, on the 20th anniversary of the Great October Revolution in the part of the Orlovs’ House, built in the 1880s. Lenin’s sister Maria, brother Dmitry and their cousin N. Veretennikov took part in the creation of the museum. The idea of the museum belonged to the political figure Sibgat Gafurov.

The museum is situated in the historical centre of the city. It is a typical wooden house of the second half of the 19th century, in which the Russian intelligentsia used to live. In September of 1888, the Ulyanov family lived in this house, coming from the village of Kokushkino, where Vladimir Ulyanov-Lenin was in the exile for his participation in the meeting in the Kazan University on December 4, 1887.
The family lived in this house for only 9 months, but that was the time (years of 1888 -1889) when Lenin became a Marxist and it determined his future life and destiny. The collection of the Lenin Museum includes personal things, illustrative and documentary materials, photos and books about the life of Vladimir Ulyanov-Lenin and his family. In the museum you also get an idea of the city of Kazan at the end of the 19th century.

The house itself is very valuable as the monument of wooden construction and architecture of the second half of the19th century, preserved to our time. It is probably the only memorial house of those days, that is saved in its original view. It is surrounded with a small cozy park zone where rare plant species grow. All this creates a harmonious urban landscape.

The Ulyanov family didn’t have much money. They brought to Kazan from the exile only books and a piano, the other furniture was rented as well as the house. Now this house is the basis of the memorial exposition. The interior of the rooms is as close to the original as possible, and the museum collections are represented by unique real and memorial items from the past. The Kazan period of Lenin’s life greatly influenced his future political views, that later determined Vladimir as the organizer and the leader of the Communist State. That is why the memorial Lenin House-Museum is organized here in Kazan.

Millions of people already visited the museum during the years of its existence. Among them there are heads of other countries, ambassadors of foreign states, famous politicians, outstanding figures of culture and science, astronauts and others. Now we see that more and more people have great interest for the museum every year. So the museum plays an important role in the cultural life of the city of Kazan. There is a lot to do and to see here, so it is now not only a historical place connected with Vladimir Lenin, but also the center of communication, a kind of a museum club. Tourists can visit memorial, historical and biographical expositions during the thematic excursions, take part in different museum programs and exhibition projects of the museum.

The following programs and excursions are offered in the museum: