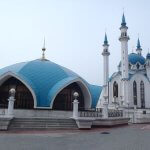 The Museum of Islamic culture is situated in the basement of the Kul Sharif mosque. The exposition of the museum occupies two halls with the total area of 566 m 2. This is the only museum in the country devoted to the history and culture of Islam among the Turkic-Tatar peoples and the peoples of the Volga and the Urals.

The main purposes of the museum are educational, research and educational activities, the identification and collection of the museum items according to the history and culture of Islam and Islamic civilization in the Middle Volga, the study and public presentations of these collections.

The following expositions are represented in the museum:

The new exposition is equipped with multi-media exhibits: