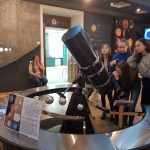 The Kazan planetarium is situated on the territory of the Astronomical Observatory, the total area of the planetarium is about 21 hectares. Here you can see the stars through the telescope, watch the films about the space. Young children can visit interactive exhibitions – dancing robots and lightning-throwing balls. The young visitors and adults can take part in the interesting quests where these moving exhibits are used.

-The usual visit to the planetarium consists of:
-Interactive tour of the planetarium exhibits
-Star show “Walking along the star sky” or “Excursus to the solar system”
-Watching a full-dome movie according to the schedule

The building of the Kazan planetarium is constructed in the high-tech style with the elements of space topic. There are 2 domes in the building: large and small. The large dome is made of a thin perforated aluminum sheet. Under the large dome there is a hall for 87 seats. It is called the Great Star Hall. It is not just a dome, but it’s a screen. The screen has a slope of 10 degrees. This allows creating the 3 D effect.

Here you see the stars and the sky as astronauts see it or as if you watch them through the most powerful, modern telescopes. There are no real telescopes in the planetarium. Visitors can admire the stars thanks to the digital system for full-dome films and thanks to the optical-mechanical projector.