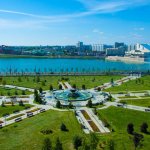 In Vakhitovsky district of Kazan you can visit one of the most amazing and beautiful parks of the city that was built in honor of the 1000th anniversary of the capital in 2005. The tourists call it the Millennium Park. Nowadays this place is really popular not only among the guests of the city but also among the citizens of Kazan who come here for a walk with the whole families.

The park occupies the territory of 5 hectares, everything here is planned and designed very thoroughly to be most convenient for the visitors. In spite of the fact that the trees and bushes in the park are small and rather young the park looks really wonderful and attracts a lot of people. The territory of the park is divided into the following zones: the Eastern sector, Garden of Sorrows, Garden of Love, Maydan, Western and Zarozhdenie. Each sector is peculiar in its style and landscape design. The western and eastern zones of the park are joint by big and small walking paths in the central part.

The whole territory of the park is a big green lawn and in summer time you can see a lot of students sitting on the grass and having a rest or talking with each other. In winter a big fir tree decorated with bright lights is placed in the centre of the park, and people can admire its beauty. The territory of the Millennium Park is surrounded by a forged fence, on which you can see national motifs. In total there are 8 gates leading to the park.

In the centre of the park you can see a fountain designed in the form of a big bowl (kazan). Many young people come here on their wedding day and throw coins into the fountain asking for happy and prosperous life. This place is really beautiful and it is worth visiting the park to have a good rest and to get new emotions.

The Millennium Park is situated in the centre of Kazan not far from the north bank of Nizhny Kaban Lake.