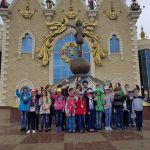 “Ekiyat” is on the oldest theatres in Kazan that was founded in far 1934 and has a rich history
and a very interesting repertoire of fairy-tales and performances for children. The new building
of the Puppet theatre was opened in 2012 at the address of Kazan on Peterburgskaya Street, house 37 It occupies more than 17 thousand square metres and now it is one of the biggest theatres in the country. Every year a few hundred thousand people visit the theatre. They are not only the citizens of Kazan, but also guests from other cities and regions who come to the capital of the Tatar Republic with their children.

The architecture of the theatre building is quite interesting and attractive. The theatre itself
resembles a medieval castle designed in the children style. On the façade of the building you can
see a lot of characters from cartoons and fairytales and a large clock with an unusual dial. The
design and decoration inside the theatre are also very interesting so that the children like it very
much and remember their visit here. In the “Ekiyat” theatre there are two halls; the big one is for
250 seats and the small one is for 100 visitors. So it is possible to show performances for big
groups of children.

The repertoire of the puppet theatre is very wide, it contains not only Russian fairytales, but also
performances based on the fairytales of other peoples of our country and shows devoted to different holidays and occasions (New Year etc). Since 2005 Ekiyat theatre is an honorable member of the Association of Russian theaters of the 21st century. Actors of the theatre have tours in other regions of our country and also abroad. In the theatre there are halls for performances, playing areas, shops, cafes, creativity centers for children and other interesting places. That is why many tourists who come to Kazan take the chance to visit the “Ekiyat” theatre with their children by all means.