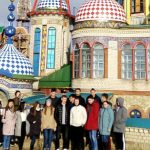 Not far from Kazan in the settlement of Arakchino there is an interesting religious centre that attracts the tourists by the building with very unusual architecture. It is the Temple of All religions. The building was designed a few years ago by artist and architect Ildar Khanov. His idea was to create a place that would be a symbol of different beliefs and religions, but not a place for prays and religious services.

The Temple of All Religions is unique; here you can find architectural features of different beliefs. Christian domes are very well combined with the Muslim domes. Nearby there are elements of the Indian monasteries. But to understand fully the whole beauty of this building you need to enter the temple. There are a few halls here; each of them is a quintessence of a certain religion: Tibetan, Egyptian, Rosicrucian, Catholicism, Orthodoxy, Islam, Japanese Zen Buddhism and others.

The entrance fee is not high, so everybody is welcomed here. The Temple of All Religions is opened every day. By the way the building is still under construction because according to the project a few more domes are to be added. The most interesting halls inside the temple are Theatre Hall, Hall of Jesus Christ, Picture Gallery and Tea Room. On the walls of the halls you can see the pictures, copies of famous works and elements of decorative and applied art.