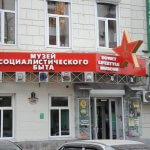 This is a unique Museum that gives you a chance to make a journey to the forgotten times of the USSR. The main idea here is not the items of the expositions, but the spirit of that time, the atmosphere in which the whole country lived a few decades ago. The building was not chosen by chance. It used to be a communal flat of 200 sq.metres where 20 people lived. The house itself was built in the middle of the 19th century. Real brick walls, old wires, «those» famous switches, cast-iron heating batteries…

While watching the expositions and touching these things you can understand how our great multinational country lived. Here you travel to the bright past. The museum was founded in the far 1990s, when the long-standing mode of life of Soviet people was ruined, and attributes of everyday life began to change. Many usual things that used to be usual for everyday life were rapidly disappearing. At that time photographer-designer Rustem Valiakhmetov decided to preserve the “Soviet design”. He began to collect things that other people began to throw away as unnecessary for everyday life and use.

The museum was opened at the end of August 2011 when the «Soviet School» exhibition was organized. The project can really be considered national. A lot of citizens of Kazan of different ages and social groups took part in its creation.

The museum also has the hall of Rock and Roll Glory, the unique exposition in the country, where more than 100 guitars and clothings with autographs of famous rock artists are collected.