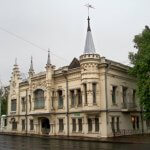 The Gabdulla Tukai Literary Museum is situated in a two-storied house built at the end of the 19th century (Shamil’s house). The building for the museum was not chosen by chance. It is located in the street closely connected with the activities of Tukay as a journalist and publicist. Now this street is named after the poet. Tukai loved to walk along the streets of the Old-Tatar Sloboda, on the shores of Kaban Lake, and he read lectures in the club “Sharyk”, which used to be very popular among the Tatar people.

In the museum we can get acquainted with the editions of Gabdulla Tukai’s works, his photos, we see the newspapers and magazines, with which the poet worked, his personal things and the death mask of G. Tukai. The most valuable exhibits of the museum collection are the poet’s memorial things. Among them there is a woven basket, his silver cufflinks, a metal pencil cup, bought by Tukai in St. Petersburg in 1912.

The poet’s works were extremely popular in Kazan and he was recognized. During his life, his works were published in different editions 35 times. The exposition of the museum tells us about his life and work, about his trips to the Simbirsk region, Nizhny Novgorod, Astrakhan, Ufa, Troitsk and St. Petersburg. Besides we can learn about the life of the Tatar society at the edge of the 19th-20th centuries. The exhibion speaks about the ambitions and search of prominent people of the Tatar intelligentsia, about the development of the national ideas and culture in the early twentieth century.
The museum was opened by the 100th birthday of Gabdulla Tukai. On the second floor you see his sculptural image created by Rada Nigmatullina. As if the poet himself meets you in his museum. The high decorated doors are opened with a slight groan, making you shudder with some vague feeling. The floor slightly creaks as if it prepares you for a mystery. Each exhibit of the museum keeps the memory of the great poet like a silent witness of his life. And of course, Gabdulla Tukai’s personal things are of the greatest interest among visitors.

Gabdulla Tukai (1886-1913) is a great Tatar poet, one of the founders of Tatar literature and modern Tatar language. His works were included in the golden fund of the Tatar poetry and the world literature. In the museum you can see rare memorial things of Gabdulla Tukai, his photos and editions of his works, copies of newspapers and magazines with which the poet worked, things and documents of people from the poet’s environment, the death mask of G. Tukai. Of special interest are the household items of the Old-Tatar Sloboda, where the museum is situated, and the works of fine art. The cultural life of Kazan at the end of the 19th and beginning of the 20th centuries is widely shown in the museum. There are also two exhibition halls and the “Marble Hall” in the museum, where the permanent exhibition “Winners of the State Award of the Republic of Tatarstan named after G. Tukai” is held. You can also visit a literary salon and a bookshop here. The Club of the Tatar language and literature teachers “Tugan tel” (“Native language”) and an amateur Club “Dynasty” also work in the museum.